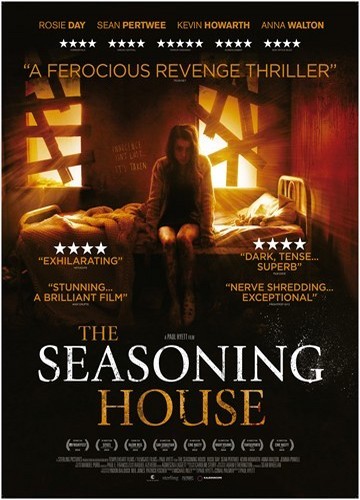 The Seasoning House sees the directoral debut of the UK's special fx master Paul Hyett. Having thrilled audiences for years, with some truely amazing prosthetics and makeup effects, Paul's first film is a dark and distrubing look at sexual slavery during the 90's Balkan war. The result is a nerve jangling, claustrophobic thriller that will leave you thinking about the film for days.

During the Balkan war, young women are kidnapped from their villages and brought to The Seasoning House, a hideous brothel where they are drugged and raped by the military. One of the captive’s Angel (Rosie Day), is a deaf mute who is put to work preparing the other girls, by her captor Viktor (Kevin Howarth). Tiny little Angel, realises she can move around the house undetected, using the ventilation shafts contained within the walls. Forming a bond with a girl who can sign, Angel is enraged when a brute of a man, kills her new friend. She seeks vengeance and plots a remarkable escape. The Seasoning House is a modern day David and Goliath tale.