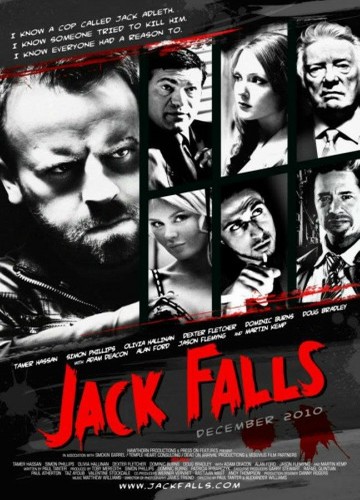 Completing Britain’s debut movie trilogy, Jack Falls is the last part of the popular Jack series of crime dramas. Following on from Jack Said and Jack Says, Jack Falls continues the story of Jack Adler, an ex deep cover policeman, who’s life is spiralling out of control. Having survived an assassination attempt in Amsterdam, Jack arrives back on his old turf in London intent on retribution. He soon discovers his former police colleagues may be responsible for the hit, not the criminal gang he testified against. As he struggles to stay alive, Jack must finally face the demons of his undercover past.

Jack Falls was shot predominantly in black and white, with added touches of colour to give it a stylish aesthetic in the vain of Sin City. The film features a wide range of British acting talent, including Dexter Fletcher, Olivia Hallinan, Alan Ford, Tamer Hassan, Adam Deacon, Jason Flemying and Martin Kemp.