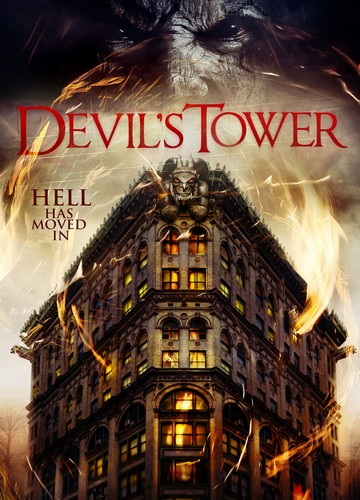 A forgotten and undiscovered resident of the grim high rise tower block 'Albion Court' has died in front of their television and is left to rot. The corpse, decaying for years in front of a stream of TV broadcasts, gains the ability to control people and the screens around them, growing ever stronger as human emotions rise. Sara, a young girl who moves in to the flat below, fails to notice a stain on her ceiling, which is the only clue to the paranormal presence. When her alcoholic, abusive mother refuses to stay out of her life, Sara’s emotions go off the scale and the poltergeist embarks on a bizarre killing spree which the authorities refuse to acknowledge. Aided only by a coward and a junkie Sara needs to confront her own demons if she’s to make it out of the tower block alive.

Devils Tower is a horror movie punctuated with moments of awkward black humour. It is a classic poltergeist tale set against the modern backdrop of broken Britain.

Devils Tower is the seventh feature film production from the Derbyshire based Hawthorn Pictures. Helmed by producer and director Dominic Burns, who has directed the likes of Richard E Grant, Mark Hamill, Julian Glover and Jean Claude van Damme, Hawthorn specialize in producing low budget feature films with high production values. Hawthorn have secured distribution deals for all of their previous productions.

With over a decade of experience directing horror shorts, Devil's Tower is Owen Tooth’s feature film debut. His 2010 short “Conceptual” was selected to be included on the UK DVD and Blu-ray release of Paranormal Activity. This short was later described by Total Film magazine as one of the scariest horror shorts of all time. Owen shot Devil's Tower in a fluid fashion, utilizing steadicam and dolly shots to creep through the corridors of the characteristic building which the team hadexclusive access to prior to demolition.