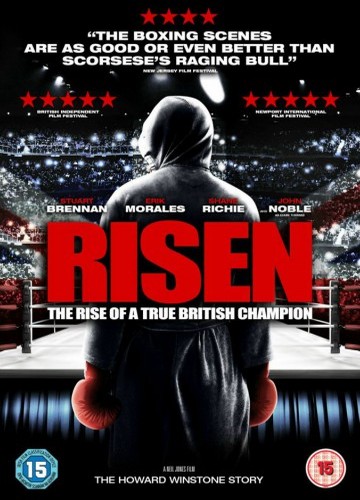 Risen is a true life story of the remarkable boxer Howard Winstone. In 1968 Howard had already become the World Featherweight Boxing Champion and was renowned for his formidable punching power in his right hand. He still worked in a factory in Merthyr Tydfil and suffered a terrible industrial accident. His right hand got trapped in a machine and tore off the tips of three fingers, leaving Howard unable to form a fist. It was naturally assumed that his boxing career was over, but Howard had other plans. Through an astonishing degree of dedication and perseverance he managed to adapt the way he boxed, focusing on his left hand. Though completely against the odds, he started wining boxing matches and slowly but surely worked his way though the boxing leagues to take a shot at the world championship again.

Risen is a faithful retelling of Howard’s remarkable journey and shines a light on some of the personal difficulties he overcame, as well as the physical injuries, to become one of the true legends of Boxing.