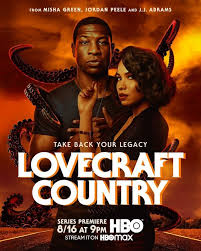 Fans of the original novel will already know that the book explores the relationship between the horror fiction of early 20th-century horror author HP Lovecraft and racism in the United States during the Jim Crow Laws.

'Lovecraft Country' is told from the perspective of a black sci-fi fan, Atticus Turner and his family.

The HBO adaption follows the story of Atticus Black (played by Jonathan Majors) and his friend Letitia (Jurnee Smollett-Bell) and his Uncle George (Courtney B. Vance) as they search for his missing father. This quest also digs into Atticus’ complicated family background, involving a sinister cult, the mysteries of the universe, and some very powerful magical forces.

The synopsis for Lovecraft Country teases: “Atticus Black joins up with his friend Letitia and his Uncle George to embark on a road trip across 1950s Jim Crow America in search of his missing father.

HBO said of theMisha Green, Jordan Peele and J.J. Abrams-produced series “This begins a struggle to survive and overcome both the racist terrors of white America and the terrifying monsters that could be ripped from a Lovecraft paperback.”

To read full article, watch the trailer and find out more about the cast please visit the following link