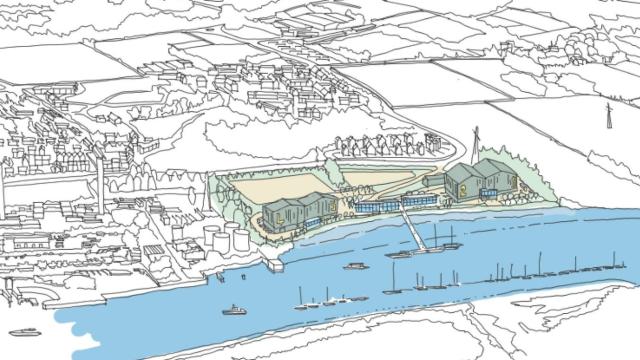 A new Film and TV studio is planned for the Isle of Wight where it will be constructed by Medina Studios Ltd at the complex on the banks of the Medina River in East Cowes, after it was recommended at an Isle of Wight cabinet meeting on Thursday.

The new media facility will have four sound stages totalling 70,000 sq ft (21,336 sq m) and will be the island's "first screen-based media hub".

Business cabinet member Julie Jones-Evans called it a "game changer". She also said it would lead to "high-quality creative jobs at the leading edge of this evolving and fast-growing sector".

Media Studios Ltd said it would benefit from "copious amounts of filming locations on its doorstep", as it was "nestled amongst woodland, clifftops, beaches, historic villages [and] period houses".

Duncan Heath, speaking on behalf of the company, said: "I've been in this business a long time and been lucky enough to be involved with some of the largest feature and television productions. He continued with “But I have to say this is one of the most exciting projects I've ever been involved with".

David Godfrey, who was one of the designers of the studios, said they would "attract a variety of productions who wish to base themselves on the island".

The cabinet report revealed the council purchased the site in 2018 in order to "secure a major employment development site for the benefit of the island". It will be based at the former Kingston Marine Park, which has been vacant for more than 10 years.