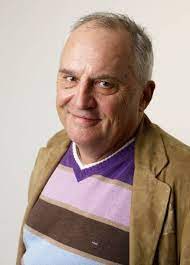 John Zaritsky has died at the age of 79.

In a statement, John Zaritsky’s family said: "Entrusted to document raw and vulnerable moments in life. Zaritsky did so with an insightful heart for families considering genetic testing for Huntington’s disease [in] 'Do You Really Want to Know?', a vibrant performer who vowed to get the last laugh over Lou Gehrig’s disease [in] 'Leave Them Laughing', and men facing their greatest fears in 'Men Don’t Cry: Prostate Cancer Stories', which he shot shortly before discovering his own diagnosis with the disease."

The acclaimed filmmaker was reportedly working on his memoirs at the time of his death and soon before he sadly passed away claimed to his family that he had been "one f****** lucky guy."

The family’s statement continued: "His greatest joys were spending time with [his family] as well as travelling, sharing stories with friends, and his late-in-life discovery of English football. Just before he died he said 'I am one f****** lucky guy'. In his memory he would like you to do two things. Take a friend out for a beer or two, and watch a locally-made documentary and allow your life to be changed a little."

Our thoughts are with John Zaritsky's family and friends at this sad time.