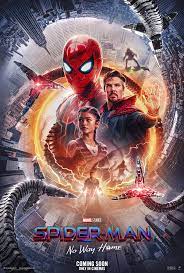 ‘Spider-Man No Way Home’ became the first pandemic-era movie to cross $1 billion a couple weeks ago, but it’s not ending its adventure there. It continues it’s global domination taking in a whopping $1.55 billion (£1.1 billion) so far.

In terms of domestic box office gross, the movie has made over $670 million, which brings its earnings very close to Infinity War, which closed out its domestic numbers at $678 million, and $2.05 billion overall. If No Way Home surpasses the 2018 Avengers film with $8 million more stateside dollars, it will take its spot as the fifth-highest grossing domestic release of all time. What’s even more impressive is how the Spider-Man film has been able to reach these heights as COVID-19 cases climb after the holidays and a rapidly-spreading Omicron variant rages on.

To watch the trailer for the film please visit the following link
https://www.youtube.com/watch?v=JfVOs4VSpmA