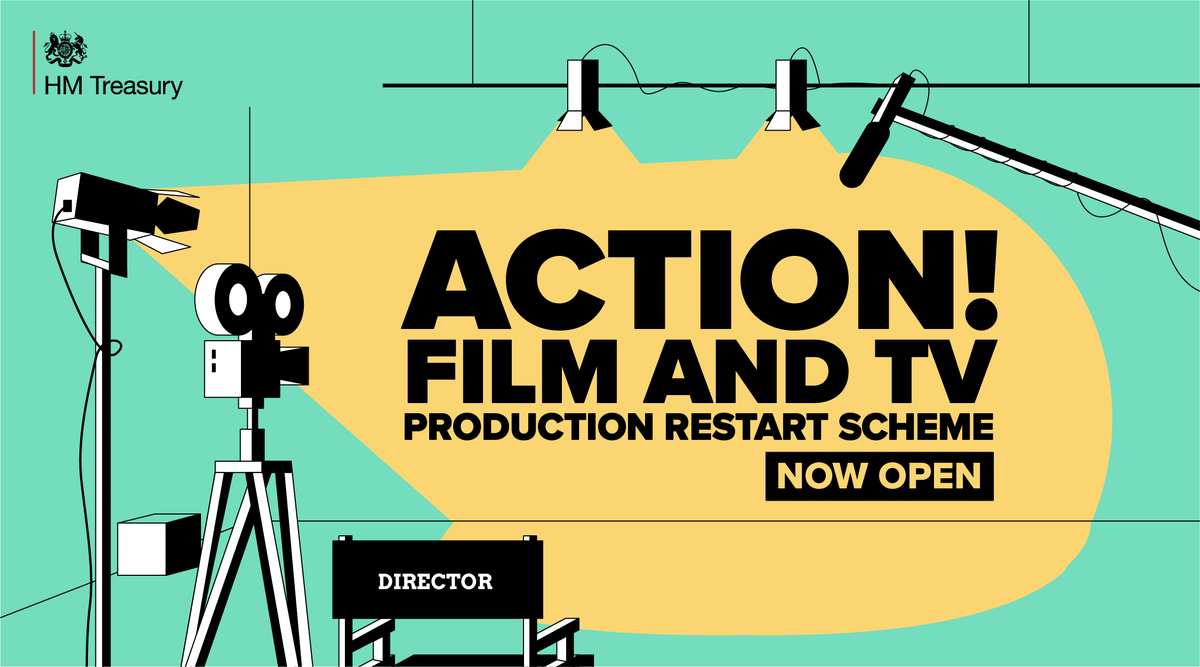 The scheme launched for registrations in October last year and allowed claims to be backdated to July to enable productions that were mainly affected by the pandemic and were unable to secure insurance against potential Coronavirus related delays and interruptions for example illness amongst key cast and crew.

To date the scheme has enabled:

● A total budget spend of £1.9 billion across the 640 productions on the Scheme, enabling the UK production sector to be a significant contributor to the UK economy

● More than 55,000 jobs to be provided by the productions which have registered with the Scheme

The scheme is now being kept under review as the industry has nearly recovered from the impact of the pandemic and was extended to provide cover until the end of this year as part of the Budget.

Other measures that have been put in place has also helped to the pandemic recovery for the sector which includes detailed COVID-19 health and safety guidance for film and high-end television drama production and other types of TV programmes through to pos-production guidelines.

The Culture Secretary Oliver Dowden said in an interview: “I've seen first hand how this scheme has been a lifeline during this pandemic, keeping the cameras rolling on TV and film sets across the country, and supporting tens of thousands of jobs in the process – from actors, make-up artists and technicians all the way to catering companies and transport firms”. He continued to say “Thanks to this scheme, our screen industry is raring to go -– and British-made productions will be at the heart of our recovery.”

The Chancellor of the Exchequer, Rishi Sunak, said: “Our world-leading film and TV industry supports hundreds of thousands of jobs – that’s why it was so important we helped it to get up and running again as part of our Plan for Jobs. He then went on to conclude with “It’s great that one year on since its launch the Restart Scheme has given so many productions the confidence to keep shooting, supporting jobs across the UK and producing the film and TV we all love.”

Ben Roberts, BFI Chief Executive, said: “We make high quality film and television content enjoyed by audiences at home and around the world, demonstrating the skills and expertise of our world-class crew, cast and production businesses. The pandemic brought production to a halt early last year and was unable to restart without insurance cover against potential COVID disruption, however the Government’s Film & TV Production Restart Scheme has been a game-changer for the industry’s recovery. A year down the line we are looking at a booming sector attracting further commercial investment and opportunities for more jobs and contributing to the UK’s economy.”

John McVay, Pact CEO said: "At a time when UK TV and film productions were looking as if they would never get back to work, the Government's Film & TV Production Restart Scheme provided the critical business support for the sector, enabling them to start or re-start their productions, keeping people in jobs and getting new content on UK screens.” He continued to say “Productions across the UK play an important role in the wider economy too, providing income for locations, catering companies, transport firms and many more. So the scheme’s benefits extend beyond just our sector.”

Hakan Kousetta, co-founder and joint Managing Director of 60Forty Films and Chair of the Pact Council, said: “The Government Restart Scheme has been an amazing success story. It has allowed the sector to thrive through the darkest days of COVID, and in doing so, ensured billions of pounds have been poured into the wider UK economy. As we all learn to operate in a world where COVID continues to subsist, the Restart Scheme has become a pillar upon which the future success of the sector rests. Hopefully its incredible effectiveness makes it a no-brainer for the Government to continue to operate the scheme in the future.”

Additionally to the Film and TV Production Restart Scheme, the sector has also benefited from £27.6 million of support to independent cinemas through the Government’s Culture Recovery Fund.

A full list of independent film and television productions using the Film and TV Production Restart Scheme is published and available on the below website. Productions which may not yet have been announced but are on board the scheme are not published.