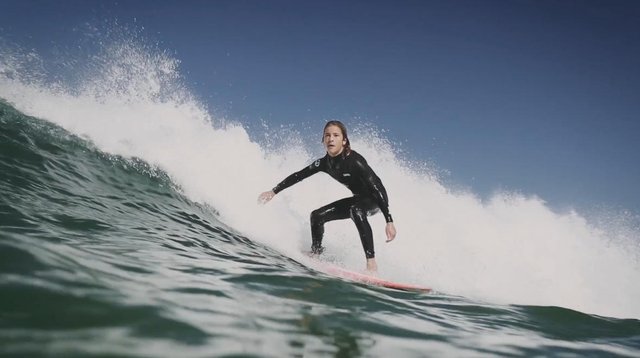 The documentary ‘Ride the Wave’ is due to be released this summer. As well as following Ben Larg on his travels on white beaches and surfing tournaments around the world, it will also paint a family portrait of Ben and his sisters Robyn and Lily, and parents Marti and Iola, as they run a water sports business from a beach hut.

The government agency ‘Screen Scotland’ helped with the funding of the project by adding £106,000 to the pot and the documentary is expected to be showcased at leading film festivals around the world over the next few months after post-production has been completed, said the director-producer Martin Robertson,

Martin Robertson said in an interview “I’ve known Ben’s family for years having been a regular visitor to Tiree and had followed his exceptional talent as he grew up. He’d just been crowned the under-18s Scottish champion at the age of 12 when I started speaking to the family about the possibility of a film. The initial plan was to follow Ben and his dad Marti to the International Surfing Association world championships in Japan as a massive underdog, as he was the youngest competitor there, but it became clear that the world stage was beyond Ben at that point. It then became a story about an exceptional family who spend most of their time on the beach and Ben’s story of growing up with an exceptional talent but perhaps not quite fitting in on the island. It’s a film about boyhood, growing up, becoming an adult, the challenges of living in a remote community and doing something exceptional against all the odds.”

The young sensation Ben Larg commented “I think I was on a surfboard for the first time when I was two and probably started surfing every day when I was six or seven. I took part in my first competition in Thurso when I was 10 and entered the Scottish championships the year after that. It's just a brilliant feeling catching and riding waves. Every time you catch a good wave you want to catch a better one. When you think of surfing you normally think of Hawaii or somewhere like that. But Tiree is a brilliant place to learn - the waves are so good you can basically go surfing every day. It’s a great training ground for anyone who wants to start.”

The screen officer at the government agency ‘Screen Scotland’ Ben Taylor added 'Ride the Wave' is an incredibly exciting project. Ben, the subject of the film, is an amazing talent and the film will give audiences a fascinating insight into the world of professional surfing and the personal sacrifices made by a young Scottish surfing prodigy and his family.”

To learn more about the documentary you can visit their website