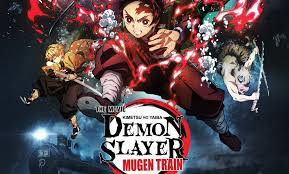 Back in December, 72 days after its release in October, 'Demon Slayer -- Kimetsu No Yaiba -- The Movie: Mugen Train' became the highest-grossing film in the history of Japan’s box office takings pulling in 32.12 billion yen soaring pas the previous title holder, the Oscar-winning Japanese anime ‘Spirited Away’ created by Hayao Miyazaki, which made 31.68 billion yen in takings.

The animated movie has also reached a wider audience and continues to break records in the North American market with $21,144,800 opening in April, which is the biggest debut foreign-language film in U.S. box office history, as stated by the U.S distributors for the movie.

The series from which the movie is based upon is set 100 years ago in Japan and tells the story of an adolescent boy fighting human-eating demons while searching for a cure for his demon-turned sister. It has also been translated into several other languages.

The movie directed by Haruo Sotozaki is based on the manga series by Koyoharu Gotoge that was published on the Weekly Shonen Jump between 2016 and 2020.