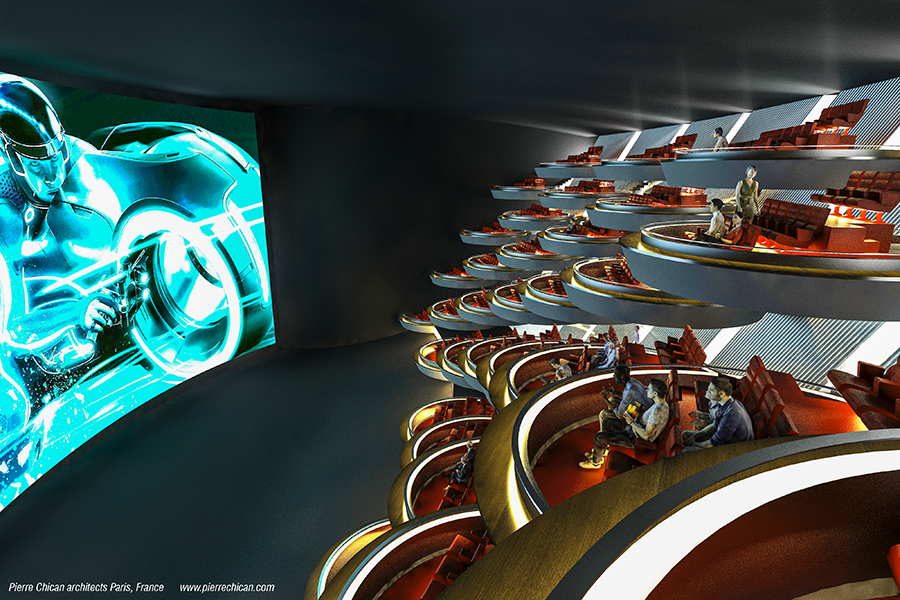 Under development in Paris, a new cinema viewing concept will be the first of its kind, although there are discussions with further multiplexes and cinema operators to chart an expansion plan.

Nicolas and Pierre Chican came up with this idea two years ago and while Ōma’s design was conceived before COVID-19, it obviously lends itself well to the notion of social distancing and has become even more intriguing to the industry since

The Ōma Cinema vertical concept is based on a platform layout, which offers flexible seating arrangements on each balcony and projector positioning among special seating pods to allow cinemagoers to get much closer to the screen and the action. The design allows for the slope of the seating to be around 50-60 degrees, which is more than double the industry standard slope of around 20-25 degrees.   Unlike traditional cinemas, all entries and exits are from the back of the room, so there is no visual interruption or distraction during the film.

Nicolas Chican, Co-Founder of ‎ Ōma  said “Our focus is to ensure that audiences across the movie theatre have an optimal viewing experience.  Our concept doesn't have to exist in a multiplex. While it can be the jewel or the flagship offering of the multiplex, it can also be a standalone or single-screen cinema. We have also been approached by cities that want to redevelop existing buildings, or in areas with a signature landmark link and exhibitors adding single screens to their portfolio of offerings.”

The company continued to say “The concept of staggered platforms is aimed at the central positioning of the projector and would mean the audience flow into a cinema would be naturally managed without overcrowding. Customisable platform distribution would allow operators to choose between size, number of levels, platforms per level, as well as seating configurations per platform.”

“The ticket price for an  Ōma  would be at the cinema operator's discretion. Even if  Ōma  Cinema is a premium experience, cinema must remain a leisure activity accessible to all,” said Nicolas Chican.

Nicolas Chican continued to say “The demand from audiences for amazing film content is evergreen, and this just builds a much more unique experience in which they can enjoy great content. We hope that Ōma will completely change the way people experience films in a cinema theatre,”

Nicolas Chican also hopes to clinch discussions with Indian cinema operators and finalise expansion plans for the Indian market in the coming months.

The first cinema of it’s kind is currently under construction in Paris and hopes to open up later this year.

Take a look at the concept video on the link below:
Ōma in Paris will be the world's first 'vertical' cinema with private pods (globetrender.com)