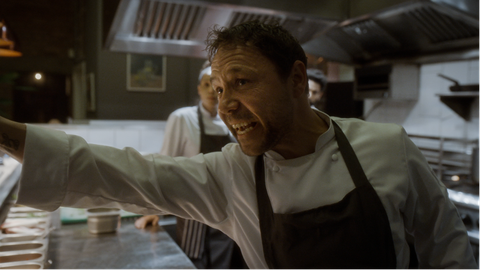 The feature film directed by Philip Barantini (Villain) stars Stephen Graham as a head chef of a high-end city restaurant, the story taking place on one particular, very busy service in the run-up to Christmas. The film is a drama with Graham’s character, Andy Jones, having to contend with jobsworth health and safety inspectors, addiction, personal strife, debt and a troubled life back at home, all over the course of just a couple of hours. The feature is based on the BIFA-nominated short of the same name, which also starred Graham and was written and directed by Philip Barantini.

After the shooting phase had wrapped, only days before the government shut down the film industry due to the pandemic, nearly all of the post was completed remotely during lockdown.

Synopsis
This is ‘Magic Friday’, the last Friday before Christmas and the busiest night of the year. Andy Jones, Head Chef at one of the top restaurants in London, is battling debts, addiction and an imploding personal life. The pressure is already on when health and safety services unexpectedly show up for inspection. Shot in a single take, in and out of a kitchen reaching boiling point.

As well as the UK, Boiling Point has been picked up for distribution in France (UFO), Spain (Filmin), Canada (Mongrel), Portugal (Cinemundo), Lebanon & Gulf (Empire), Australia & New Zealand (Rialto) and Japan (Cetera). A US deal is currently in negotiation.